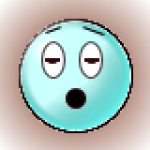 Late Friday 6/25, we finally got a client new surveillance security system up and running; the afternoon fishing opportunity in the Key was stolen from us.   As we scurry home on Sawgrass Express, I have decided to stop at Atlantic and see if we can not soak in a few frogs at 6:30 Pm.   There were a few fishermen chasing bass, I decide to teach Sponge Bob how to dunk for a few snake head.   I locate a giant snake head couple with babies at the head water of this C-14 canal and had Sponge Bob practicing his skill on them.   I walk over to the dead pool to the left and right flank of this spillway, a couple disturbances in the cesspool silent just locked into my well calibrated Clown Knife’s Sniper eyes.   Sure enough it was my first Clown Knife confirmed sighting in C-14.  There were also walking catfish and bowfin that surface and can almost fool you, but the clown on the roll back you can see the distinctive lasagna cringe ruffle noodle like tail during the roll.  I also notice a couple of the clown knife was darker without spots.  Hmmm wonder if this is the African Ghost in there too?  They were very skittish and surface roll were distinctively quick and silent where the walking catfish was recklessly long.  I try taking photos but they were so quick; my I Phone 4G has not arrived yet so I can not film.   The Clown Knife was so quick I was shooting as many frame as I can but finally got some decent concentric roll with mitigating stealth ripples.

Wife call at ten to seven pm that we have dinner at Lemon Grass with the Family in Boca so I had to cut short my brief excursion into virgin confirmed clown knife territory in West Broward. No tropical smelt to nail them so I will return July 4th to hunt.

Saturday 6/26, my two fury roosters decide to call me up at five am, as I glazed my eyes sleep walking down the stair to take Mimi and Heidi out for their organic farming ritual, clown knife addiction dream kick in so I found myself awoke to the C-14 Headwater at six am.  Thick curtain of humidity hung and some late ladies of the night diners were busy buzzing around my ears still begging for a quick breakfast of hemoglobin.  I sleep stumble to the slough just southeast of the C-14 dam and saw the nine lb plus giant snake head pair and even a larger third snake head Loch Ness monster following the pair’s eight inch baby snake head swarm.  This was the first giant snake head three some I have seen and it ain’t about sex.   I quickly cut my clown knife rig and switch to a white scum frog with blood red kicking legs and shot that scum right into the boiling school of baby snake head bait ball.

Jeffrey Dahmer the Cannibal Loch Ness Snakehead took the opportunity and slam in to the ball bait of baby snake head as my frog hit bull eyes into the melee and generate mayhem.  The giant snake head couple turn on Jeffrey Dahmer with the ferocity that any loving parents would do; the battle of the Jutland was on, as the bait ball are now corral into a C-14 canal bank cave.   Mama Giant Snake head ram into the side of Dahmer the Cannibal Snake head as Papa Giant Snake head try to bite the eyes off Dahmer like two giant ballistic submarine torpedoes on full bow impact.  I reel in my scum and add on a lead weight to get more accuracy in the breeze that starting to pick up at seven am with the Sun rising.  Fifth snipe I finally hit Dahmer smack into his shoulder south of the left flank and he turn and bite at the blood frog with a drug like induce sadistic eyes trance.  Dahmer star board was ramming by the couple pair now while I set the hook and you can see Dahmer adrenaline just explode out of C-14 Headwater like a Salmon jumping up the dam to spawn or a bull shark on a biting rampage.

The sweat of fear dredge down my neck as the realization that I did not bring my giant world record snake head landing net, just minnow dip net I had brought to catch baits for use as live chum for the skittish Clown Knife; to bite my freshwater pilchard I had just cast net on the canal west and on top the C-14 dam spillway.  I literary had to drag Jeffrey Dahmer away from the murderous parents set on avenging the murderous cannibal that ate a half dozen of  their children.   I finally tire the C-14 Loch Ness monster and walk him toward the C-14 cross walk slough at the end of the spillway running across Sawgrass Turnpike where they had the fence and to the north east a shallow bank where hopefully I can tire him out with the strong current zing in through.  He finally tires out from the current and I drag him into the shallow, sacrifice my bare hand and grab him by the mouth.  My Number 16# Ahab conquer of the Sea reel with my surf road does it a again, landing another world record Cobra Snake Head just south of my personal best, Obama the 13lb 1oz from Sunrise.  Skinny Jeffrey Dahmer scale out at a disappointing 12lb on my IGFA scale and length of 43 1/8 inch and not 15lb that I had gleefully dream off…horse feather!!!   I though he would weight more but yeah he was famish looking long bastard, no wonder he was to stupid and crazy to attack a pair of nine lb plus 37 inch giant snake head couple Bonnie and Clyde.  I caught another smaller snake head of the day around two pound.  The clowns have by now disappear and wedge them into the cave and rock ledge pile, and did not give this author the satisfaction of nailing a photogenic clown.

I have concluded that the giant 12-15lb snake heads are everywhere, the opportunity to target them are only left to one imagination and creativity and leave it to fate to present the opportunity; the Peacock massive die off of early spring have enable many giant snake head the opportunity to feed on their younger kin and made them bigger.  The oppressive heat of the summer, rise early at the crack of dawn for them or in the twilight of dusk for them, the giant snake heads are on a hungry prowl for anything long and cylindrical, anything mimic mouse or lizards; this year recruit promise for those who pursuit them a chance to garner a nice world record in the coming year.

So put in the time to commit the Snake Head  World Record Crime this summer and I can guarantee you will discover a formidable but satisfying pursuit and as always please practice catch and release; even the invasive exotic giants are a finite resources not like the infinite Mayan cichlids that snake heads love to forage on.

“You know what really pissed you up the most, this stupid Iphone iTunes upgrade bs….I have just finished writing the blog and up link my 3G iPhone to download the new photos and this new I Tunes 4.0 program just wipe out my entire photos clown fish and snake head photos I took 6/25/2020 and 6/26/2010 on my 3G iPhone, my whole contact list…vamouse…???  When to Apple site and it say my the iTunes 4.0 is not compatible with 3G Iphone,,, where the F#@##*&^%$##&^K is my 4G Iphone I order month ago???  So you folks have to imagine the photos, my cherished of photos all vaporized.  Luckily I have my old rolodex of contact I have to manually input tonight.  So anyone knows how to recover it that would help me.  Because it has the best photos of the clown fish rolls and ripples play by play my very best stalking them and of course pictures of  Dahmer the canibal Giant Snake Head next to my sixteen inch SOG knife and he is almost three time the knife.  I am going to email all my photos next time rather than face this iTunes upgrade snafu uplink again. ARRRhhh!!!”

Psss…Dondel this was the spot two Saturday ago we were suppose to rendezvous, just across is the hidden slough.